Regardless of race, gender, age, political affiliation or neighborhood, the residents of New Orleans are clearly at a crossroads. Voters in every City Council district voiced displeasure about the direction the city is moving in a survey released Wednesday (Sept. 7).

Conducted by Edgewater Research in cooperation with My People Vote, the poll indicated that nearly two-thirds (64.5%) of respondents believe that New Orleans is headed in the wrong direction. The survey also tested the strength of the current campaign aimed at recalling Mayor LaToya Cantrell. It found wide voter support for that measure, with 55% of respondents indicating she should be recalled. It is believed that the strong — but not surprising — response to both survey questions was driven in large part by crime and quality-of-life issues.

Edward Chervenak, director of UNO’s Survey Research Center, founded Edgewater Research. Anthony Licciardi developed the My People Vote app, used by political campaigns in their field operations. The poll was a telephone survey using an automated voice to reach respondents on voice over Internet protocol and land lines. Taken Aug. 30 to Sept. 1, the survey recorded responses from 402 Orleans Parish voters. It was post-weighed to reflect gender, age, racial and geographic parameters, according to pollsters. 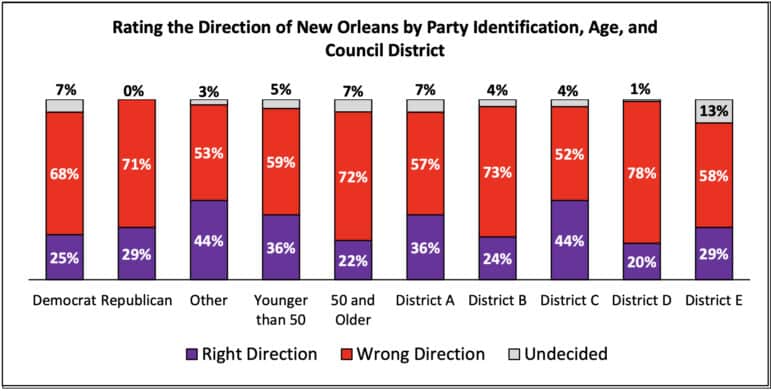 Voter dissatisfaction with the city’s direction was highest in City Council District D at 78%, followed by District B at 73%, District E at 58%, District A at 57% and District C at 52%. Districts D and E have the largest percentage of Black voters and traditionally have supported Mayor Cantrell.

Voter dissatisfaction is also stronger among voters who are registered as Republicans rather than Democrats or Independent and third party voters, though the vast majority of Orleans Parish voters are listed as Democrats. Older voter are overall less satisfied with the city’s direction than younger voters.

Overall, more than half of both males and females disapprove of the city’s direction. Women were more likely than men to disapprove the city’s trajectory. Poll results indicated that Black females were “especially pessimistic.”  In fact, Black males were the only group of respondents with a majority (57%) expressing satisfaction with the situation in the city, according to the poll. 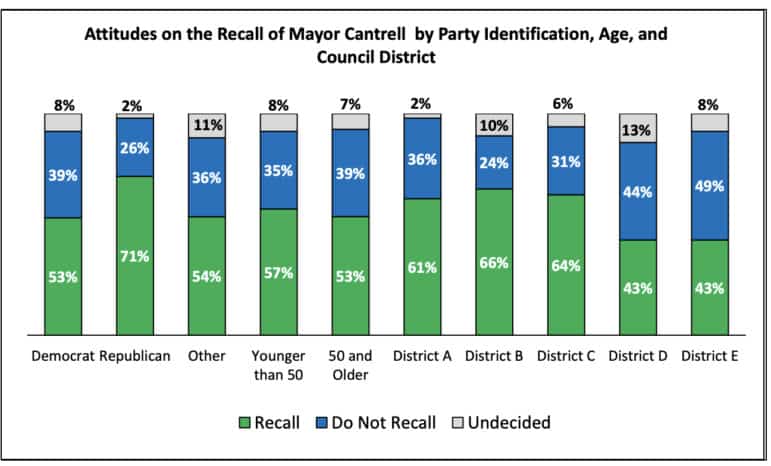 The recall is most heavily supported by voters in Council B (66%), followed by Council District C (64%) and Council District A (61%). Voters support for the recall was weakest in districts D and E, where only 43% favor recall. It could be considered a contradiction that voters in District D so strongly believe the city is moving in the wrong direction yet still strongly support Mayor Cantrell.

Recall petition advocates have until Feb. 22, 2023 (Ash Wednesday) to gather the 53,000 certified signatures needed for a recall election. Licciardi indicated yesterday that state law requires that the recall election must pass before an official vacates the office. “Then, according to the Home Rule Charter, the City Council appoints one of the two at-large council members to the mayor’s position,” Licciardi said. “Then there would be a special election if there is more than a year left in the term. The recalled official cannot be a candidate in the election to replace the recalled official.”

Another recall petition signing event is scheduled for today (Sept. 8) at Samuels Square, 2100 Napoleon Avenue, from 4 until 7 p.m. A full schedule of signing events can be found on NoLatoya.org as well as information on how to donate or arrange a signing event.  Social media expert Eileen Carter and community activist Belden Batiste are leading the recall campaign.

Danae Columbus, who has had a 30-year career in politics and public relations, offers her opinions on Thursdays. Her career includes stints at City Hall, the Dock Board and the Orleans Parish School Board and former clients such as former District Attorney Leon Cannizzaro, former City Councilman Jared Brossett, City Councilwoman at-large Helena Moreno, Foster Campbell, former Lt. Gov. Jay Dardenne, former Sheriff Charles Foti and former City Councilwomen Stacy Head and Cynthia Hedge-Morrell. She is a member of the Democratic Parish Executive Committee. Columbus can be reached at swampednola@gmail.com.</em

Jared Brossett: Here’s what you need to know about property tax hearings

By Danae Columbus, opinion columnist District D Councilman Jared Brossett almost has as much cash on hand in his campaign account than all the other council members combined. Brossett, who is term limited and expected to run for an at-large City Council position later this year, reported $103,471.61 in available dollars on his 2020 annual Read More…

The problem of poverty in New Orleans is not a new one, nor one that any City Council is likely to solve. But when the six District B hopefuls were asked what the City Council can do to help the city’s residents transcend that generational poverty, their wide ranges of responses offered some insight into Read More…