Saturday’s election snuck up on New Orleans — after Hurricane Ida delayed voting day by a month, it would have been easy to forget that there were still crucial races for mayor, sheriff, City Council and more.

Nevertheless, more than 75,000 voters cast their ballots and made their voices heard, a turnout of around 28%.

See how your neighborhood voted for mayor, sheriff and the at-large council seats below.

This race was not a nail-biter: as widely expected, Democrat LaToya Cantrell comfortably won re-election with 65% of the vote, around 49,000 ballots. Although Cantrell faced an unlucky 13 opponents, few of them garnered real support.

Republican Vina Nguyen came in second with 13% of the vote, around 10,000 ballots. Leilani Heno, no party, came in third with 9% of the vote, although she did manage to tie with Cantrell in one Mid-City precinct.

Perennial candidate Belden “Noonie Man” Batiste, a Democrat, was fourth place with 5% of the vote. Batiste managed to gain the endorsement of the New Orleans Coalition, an influential group of progressives, the Gambit reported – but that was mostly meant as a snub to Cantrell for not showing up to their forum. Maybe next time she’ll RSVP.

New Orleans hasn’t elected a Republican for mayor since 1872, but Nguyen did manage to win most of Lakeview and a small cluster of precincts in the 14th Ward in Uptown. Overall, she won the majority of votes in 34 precincts out of 351. 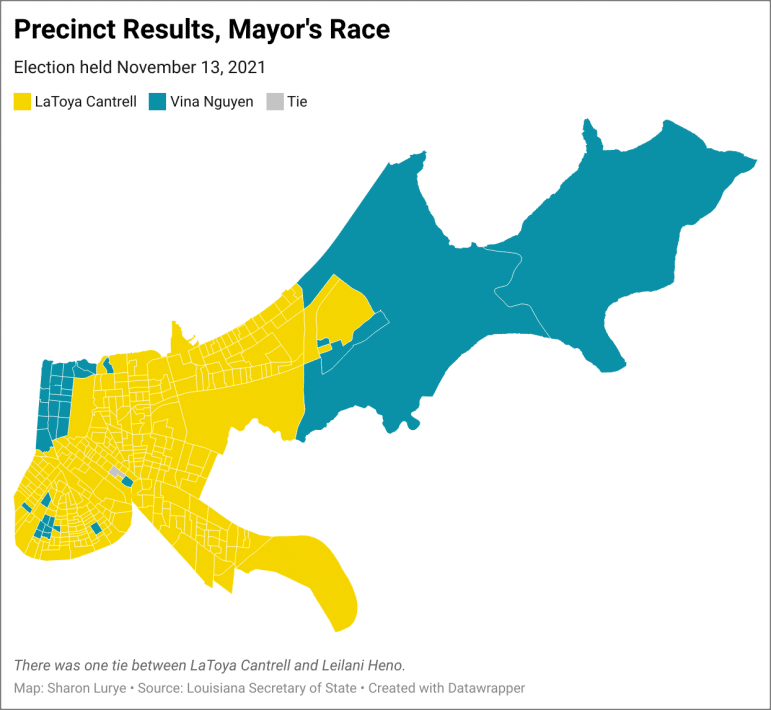 An important but often-overlooked office, the sheriff is responsible for running the Orleans Parish Prison and thus is responsible for the lives of hundreds of incarcerated individuals. Marlin Gusman has held the position for 17 years, and this race against Susan Hutson may be the biggest challenge he’s had since he was first elected.

Gusman was less than 2,000 votes away from winning a majority outright, but with only 48% of the vote, he will have to face Hutson in the runoff on Dec. 11. Both are Democrats, but Hutson is running to Gusman’s left as a reform candidate. She promises to improve medical care for inmates, stop charging people for phone calls to family members in jail, end excessive use of force, and house transgender people according to their self-identified gender.

Hutson, who was the independent monitor of the New Orleans Police Department for 11 years, got 35% of the vote. Hutson tended to win more precincts in Mid-City, Uptown, and Marigny/Bywater, while Gusman got most of Lakeview, Gentilly, the West Bank, and New Orleans East.

Christopher Williams came in third with 9%, while the remaining candidates Quentin Brown (Independent) and Janet Hays (no party) both got 4%. 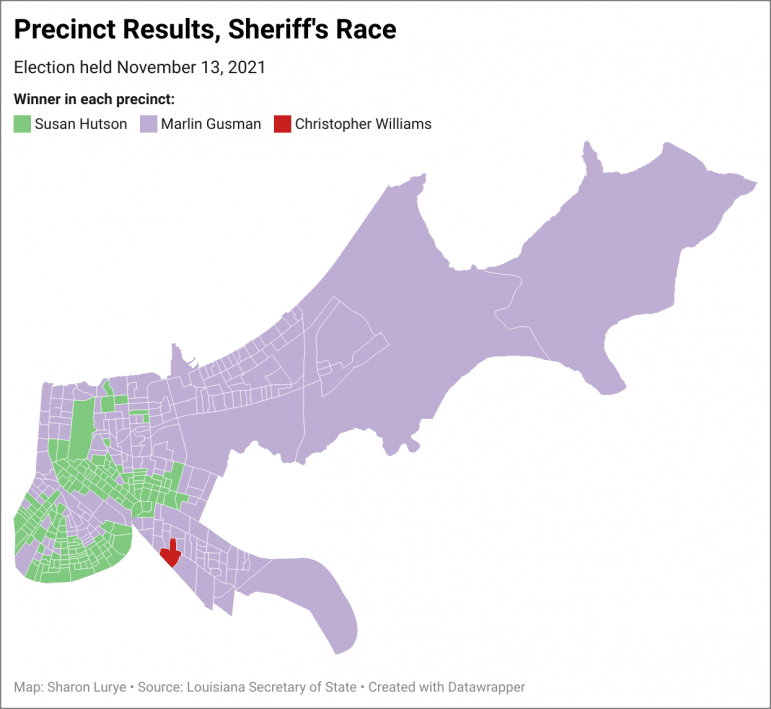 Incumbent Helena Moreno crushed it, winning six times as many votes as opponent Kenneth Cutno, a community development specialist who also lost to her in 2017. Moreno, formerly a journalist at WDSU-TV, was elected to the state House of Representatives in 2010 and to her current City Council seat in 2017.

As the head of the council’s Utility Committee, she’s become known as a critic of Entergy. She also worked to help pass policies to decriminalize marijuana possession and raise the minimum wage for city employees.

Moreno got an astonishing 85% of the vote, garnering 62,064 votes out of the 73,395 total ballots, and won in every single precinct. Even in her worst precinct, she received a supermajority (60%) of the vote. 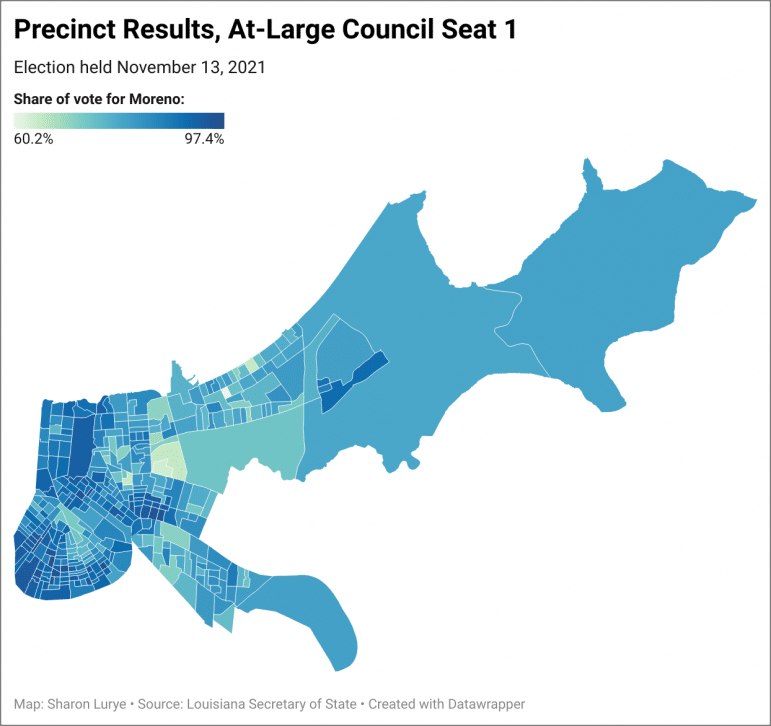 The race for the council’s second at-large seat was far more competitive than in Division 1. This race faced a last-minute shakeup when candidate Jared Brossett dropped out of the race in October after being charged with drunken driving. Brossett’s current District D council seat is term-limited.

That left Jean-Paul “JP” Morrell and Kristen Gisleson Palmer as the top remaining candidates, and they battled it out precinct-by-precinct. The race was close enough that the candidates tied in six separate precincts, but Morrell just barely managed to avoid a runoff — he squeaked by with a small majority, 51%, of the vote, around 37,000 ballots.

Palmer came in second place with 32% of the vote, Brossett still managed to come in third with 11% of the vote, and Green Party candidate Bart Everson received 7%.

Morrell, who has served in the State Legislature since 2006, gained the respect of criminal justice advocates when he helped pass a constitutional amendment that struck down the Jim Crow-era practice of allowing people to be convicted for felonies with a non-unanimous jury. His platform promised that he would “fight crime without compromising reform,” support early childhood education, and put pressure on the Sewerage & Water Board and Entergy.

Morrell also had a wide geographic base of support, winning precincts across the city but especially in Gentilly and much of New Orleans East. Palmer had small clusters of support in the University neighborhood of Uptown, Algiers and the three geographically large but sparsely populated precincts in the far eastern edge of the city. 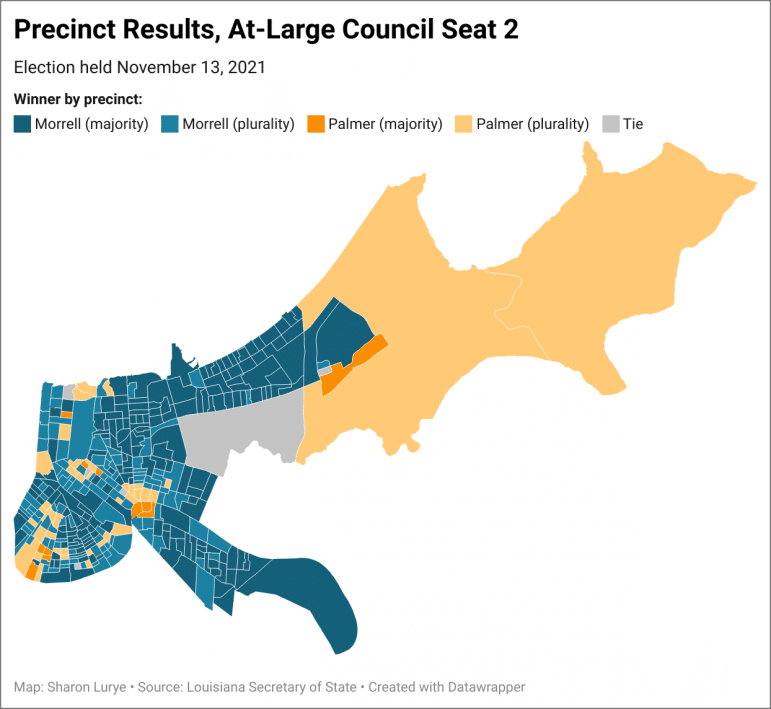 By Danae Columbus, opinion columnist The diverse group of parents, librarians and concerned citizens that make up the Save Our Libraries coalition got a boost this week when the Bureau of Governmental Research added their voice to those opposing Proposition 2 which is on the Dec. 5 ballot.  In their analysis of the ballot proposition, Read More…

New Orleans City Councilwoman Susan Guidry, who is term-limited in her District A seat, is considering a run for one of the council’s two At-Large seats this fall, and two attorneys from Uptown and Lakeview are planning to run for the seat she will vacate.