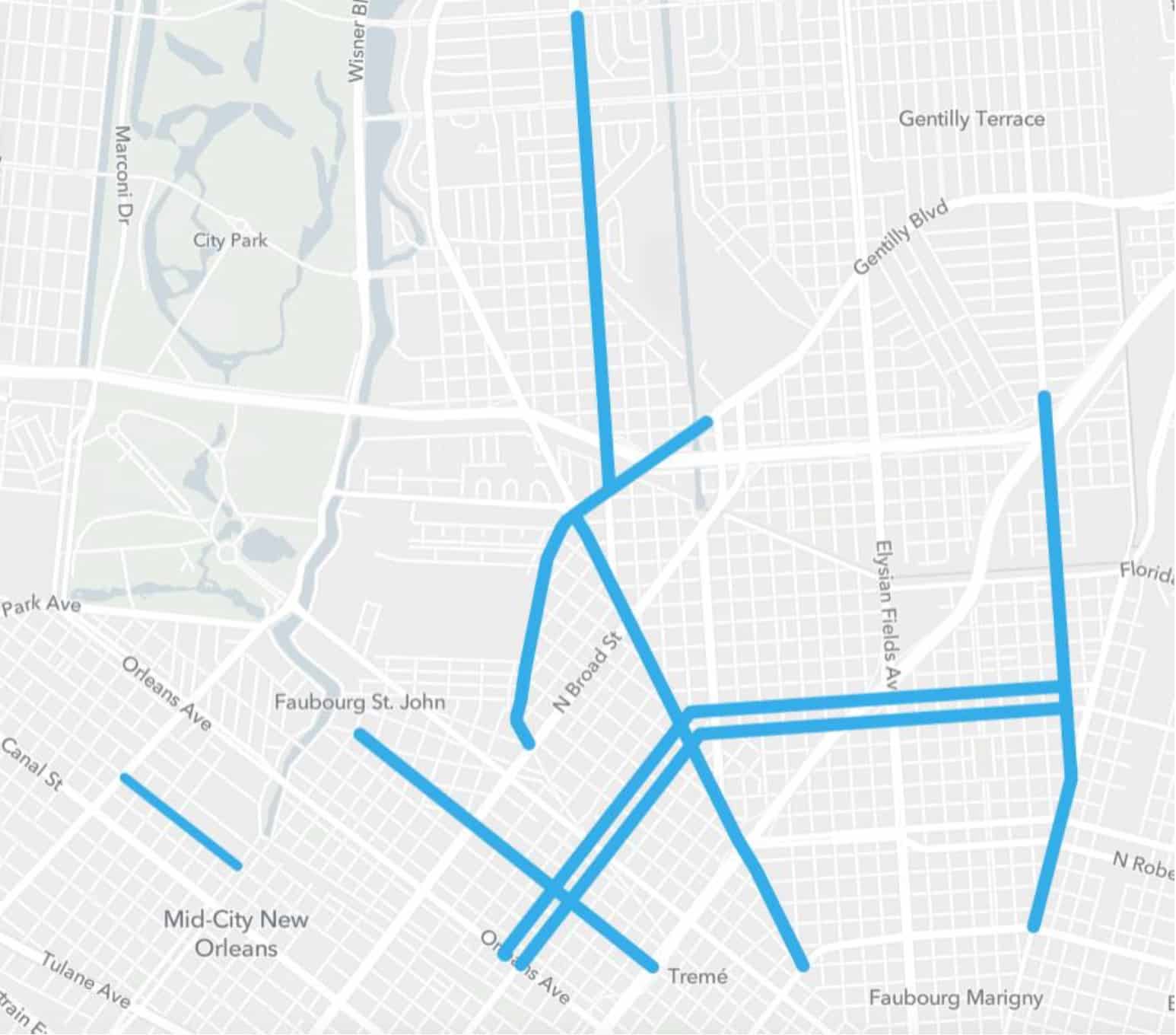 A few Mid-City and Faubourg St. John streets are getting new bike lanes as part of the city’s Moving New Orleans Bikes project.

The project, which operates in tandem with the street repair programs, is designed to accelerate the construction of 75-mile bicycle network.

“Now we have a lot of shared lanes in these neighborhoods,” said Jennifer Ruley, manager of the Department of Public Works’ Moving New Orleans Bikes project, discussing the construction plans at a recent online forum. “It’s time to upgrade those and move in the direction of protected bike lanes wherever possible.”

Protected bike lanes are separated from vehicle traffic by bollards, a lane of parked cars or other methods of preventing cars from entering the bike lane, while a shared lane can be used by both vehicles and bikes.

A 2020 survey by ALG research found that nearly three-quarters of survey New Orleanians favored more protected bike lanes even if that means reducing a travel lane. It also found that 87% of voters believe the city needs to provide safe travel alternatives for essential workers to get to their jobs.

The Moving New Orleans Bikes blueprint shows protected bike lanes at major thoroughfares, including Tulane Avenue, Canal Street, Orleans Avenue, Esplanade Avenue, Carrollton Avenue and Broad Street. Those streets, however, are not included in the current project, which covers streets in the Fairgrounds neighborhood, 7th Ward and Gentilly as well as Faubourg St. John and Mid-City.

Two streets that are currently slated for a bike-lane upgrade are Ursulines Avenue from North Claiborne Avenue to Hagan Street and Bienville Street between North Carrollton and Jeff Davis Parkway.

Construction is set to begin this winter and continue through summer 2021. Officials are still accepting feedback before the plans are finalized.

Ursulines now has a “wide and ambiguous space for travel,” Ruley said, that is shared by bikes and cars. Each side of the neutral ground has approximately 17 feet for travel. The city plans to designate 6 feet of that space for bike lanes, while keeping on-street parking.

“Narrowing the travel space has the effect of slowing people down,” Ruley noted.

A study of recorded accidents from 2014 to 2018 found 175 crashes on the 1.1 mile stretch of Ursulines. Two involved bicycles and seven involved pedestrians.

The city’s blueprint for a bike network shows the bike lanes on Ursulines will be “buffered” between Claiborne and Broad. A buffered bike lane, according to the National Association of City Transportation Officials, is defined by painted markings, commonly 3 feet of diagonal lines, where crossing by drivers is discouraged but not prohibited. From Broad to Hagan, the blueprint shows a designated, but not buffered, bike lane.

Officials said access to all legal driveways will be maintained, phrasing that indicates some residents could lose access to their current parking space.

The Moving New Orleans bike-lane project is part of a major infrastructure initiative, largely funded by FEMA, that is taking place across the city. The Bienville bike lanes, however, are part of a different project, with the state’s Department of Transportation.

“The cost of these projects is a tiny fraction of the cost of rebuilding roadways and street repairs,” Ruley said. “We get a lot of bang for the buck this way, and people become safer int heir neighborhoods.”

The short but heavily traveled stretch of Bienville from Carrollton to Jeff Davis (soon to become Norman Francis Parkway) will get protected bike lanes in both directions. The bike lanes will be adjacent to the curb, with parking between the bike and the car traffic.

The new configuration increases safety for cyclists and pedestrians but will reduce the amount of on-street parking to allow for safe sight distances for driveways.

This half mile stretch had 150 crashes between 2014 and 2018. Two of those involved bicycles and four involved pedestrians.

For the Mid-City and Gentilly area neighborhoods, the construction set to begin this winter involves new curbs in some locations; improvements to bus stops, intersection geometry and traffic signals; and minor road repairs as well as striping, signage and flex posts for the bike lanes.

Officials are asking for feedback before construction begins. You can check out the plans here and email movingneworleans@nola.gov or call 504-658-ROAD (7623).

5 thoughts on “New bike lanes planned for Bienville and Ursulines”