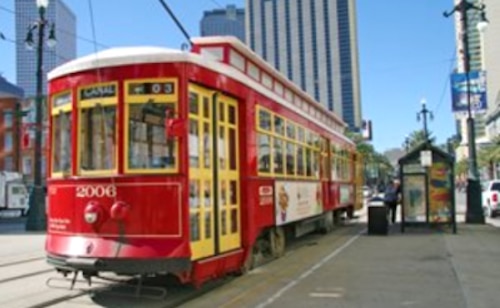 For the past two years, a group of planners has been working to turn around public transportation in New Orleans and the rest of the region. It is now seeking feedback on its New Links report, a plan for our buses and streetcars, reimagined with the idea that the system needs to serve more people more efficiently.

New Links is a project of the Regional Planning Commission, building on long-range strategic plans by the New Orleans Regional Transit Authority and Jefferson Transit. Planners gathered public feedback and crunched numbers to come up with a transit design that takes existing resources and organizes them in a more effective way.

During Phase 1 of the project in the summer and fall of 2019, the planners collected more than 1,000 surveys and held 75 public meetings, including open houses, community meetings and pop-up events. The focus was on finding riders’ key priorities in improving the transportation system — while staying within current budgets.

They found out that people like their buses to run on time. And often. They also found that the system did not always get to the people who need it the most or get them where they need to go.

“Transit is not working for most riders out there,” said Alex Posorke, executive director of Ride New Orleans, a transportation advocacy nonprofit that has been holding online forums on the proposed plan. “It takes too long to get your destination. Regional connectivity is nonexistent. What would be a 15-minute car ride ends up being a 60-minute odyssey.”

For the planners, getting workers to their jobs more efficiently was a priority. As it is, said RPC Deputy Director Jason Sappington, transit riders can only access a fraction of the jobs available in the region. “Transit isn’t a very competitive travel mode for most people,” Sappington told a recent meeting of the Mid-City Neighborhood Organization.

According to “New Links: Report on the Proposed Network,” residents on average can only reach 43% of the region’s jobs in 60 minutes or less via transit and walking. Residents with cars have an average commute of 23 minutes.

Concepts B and C received the strongest support, according to the New Links report. People generally sought transit that is more reliable, more frequent and had more regional connections.

After collecting this feedback, the Regional Planning Commission’s New Links group — which included partnerships with RTA, JET, the city’s Office of Transportation, Ride New Orleans and the St. Bernard Urban Rapid Transit — came up with a proposal that it is presenting to the pubic for feedback during Phase 3, which had the misfortune of being rolled out as the region was hit with a pandemic and active hurricane season.

The planners are urging residents to provide feedback on the plan by taking an online survey, which will be open through December. The plan can then be tweaked before the group takes it to transit officials for approval.

This New Links proposal is designed to not only make service faster and more reliable but to increase service to low-income neighborhoods with a high concentration of residents without cars and to regional commercial centers with a high concentration of jobs. But it sacrifices coverage, meaning that riders are likely to have to walk farther to get to and from their transit stops.

Mid-City residents can see those priorities played out in the neighborhood’s transit lines.

The timing is changed for the streetcar line’s two branches: City Park, which turns onto North Carrollton Avenue, and Cemeteries, which continues up Canal Street to the transit hub at Canal Boulevard and City Park Avenue. This upshot is that the Cemeteries branch will have fewer, and therefore less frequent, cars on it.

Planners point to the E1 express bus on Canal as a faster alternative for commuters; it stops only at the major intersections, such as Broad Street, Jeff Davis Parkway and Carrollton, before it reaches the transit hub. From there it picks up transfer passengers and heads to Veterans Memorial Boulevard. The route ends at Armstrong International Airport.

“It makes a lot of sense,” Ride New Orleans’ Posorke said. “Your total service on Canal actually increases. A good chunk of the ridership on Cemeteries line is going up to transfer.”

The 91 Esplanade winds from the Canal Boulevard transit hub to Orleans Avenue, Carrollton and Esplanade Avenue before turning on Rampart Street and crossing the French Quarter, CBD and part of Uptown to end at the Walmart on Tchoupitoulas Street.

This line — which Posorke, who takes the 91 regularly, said can be “packed to the gills” with service workers — will be beefed up, with three buses an hour instead of two. Buses would arrive every 20 minutes during the week and every hour on weekends.

Mid-City residents would lose the Leonidas-Treme bus, which brings riders to the Quarter and CBD via Orleans Avenue. As part of an effort to increase equity and to bring and transit where it’s needed the most, service to the Hollygrove area — identified as a neighborhood with a high number of carless households — was made broader and more frequent.

This involved reconfiguring some lines, including the 32. A new line, the 96 Leonidas-Gentilly, takes the Orleans Avenue route, but it turns on Broad and heads east. Mid-City and Faubourg St. John residents will need to take the Canal streetcar, E1 bus or 91 Esplanade bus to get to the Quarter or CBD.

“We found people are willing to walk a couple of blocks further,” Posorke said, “in favor of putting service in the area where they really needed it.”

The Broad Street bus has the highest ridership in the entire region, so the plan calls for extending the line and making it more frequent. For Mid-City residents, the 94 Broad provides a way to get Uptown and, heading the other direction, to Gentilly and New Orleans East.

The Broad Street bus, which now ends at a Washington Avenue transfer hub, would continue onto Napoleon Avenue down to Tchoupitoulas under the plan, as well as provide more frequent connections to the Freret, Magazine and South Claiborne lines.

The 39 Tulane Avenue route would be more frequent and would be extended to job centers such as Elmwood and the Ochsner complex on Jefferson Highway.

“Now it’s inconsistent and always crowded,” Posorke said. “We think it’s an enormous improvement. If you can get people out there, a real access to jobs increases.”

For more information on the proposed plan, go to the Regional Planning Commission’s New Links website. The survey is available here.