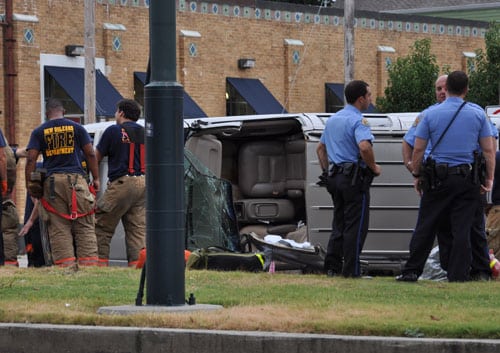 People are getting desperate.

Led by an increase in homicides and aggravated assaults, the crime wave sweeping across New Orleans and America can be blamed in large part on COVID-19 and the economic turmoil it has caused. A recent Council on Criminal Justice analysis of homicide rates in 27 U.S. cities found that the sheer number of crimes increased sharply during the summer months.  Overall domestic violence and carjackings are also skyrocketing together with drug and gang violence.

Mayor LaToya Cantrell’s almost singular focus on reducing the virus in Orleans Parish has successfully limited hospitalizations and deaths, especially as the virus’ latest wave is wreaking havoc nationally. We applaud her for those efforts. Yet its accompanying financial devastation is driving up crime in New Orleans as desperate individuals resort to reckless acts to put a few dollars in their pockets.

Along with a very real concern about how to pay the bills during New Orleans’ stalled economic recovery are factors such as an increase in gun sales, mental health issues such as depression, boredom and a lack of interaction with others.

New Orleans is a poor city where the Police Department has perpetually been understaffed and underpaid by regional and national standards. We still need to recruit hundreds of officers to have enough bodies to just keep up with 911 calls. Our Fire Department is also woefully understaffed.

City leaders are facing many tough decisions as they currently debate the 2021 budget based on projections of significantly decreased sales tax revenues and flattened commercial property taxes.

Mayor Cantrell’s recent decision to furlough police and fire personnel is a step in the wrong direction. While layoffs did occur after Hurricane Katrina when the city lost nearly all income, public safety workers were excluded — and they should be excluded now. The furloughs and lack of extra income from details is causing officers to resign or retire early, adding to the NOPD’s staffing issues. It will be virtually impossible to keep the citizens of New Orleans safe without an adequately staffed Police Department.

New Orleans is entering a dark period during which crime will continue to rise as small businesses — our friends and neighbors — continue to struggle. Further reductions to the pandemic restrictions could lead to a rebound in tourism and other economic activity. Without that, many New Orleans families will face an extremely stark holiday season.

After his Jan. 20 inauguration, President Joe Biden is expected to immediately re-instate an enhanced weekly unemployment benefit and dedicate funds for cities and small businesses. If Mayor Cantrell and the City Council are serious about gaining the upper hand on crime, they will prioritize funding for police and fire when those new dollars arrive.

Crime is cyclical. Perhaps it will decrease naturally when more people return to work and business is again robust. Unfortunately, those changes are not on the immediate horizon. Until then, we need to empower the NOPD with whatever resources are currently available to keep us safe.

The NOPD’s Faith & Blue Week starts today with a series of marches, a unity bike ride, a flag football game and community discussions.  Show the NOPD you appreciate their work by attending one of the events. Call 504-658-5590 for more information.

At 1 p.m. today (Nov. 12) the Second and Sixth districts will hold the Faith and Blue March. The march begins at Simone Bolivar Avenue and Martin Luther King Boulevard (park side), proceed on Simon Bolivar Avenue towards A.L. Davis Park, at Washington Avenue and Lasalle Street, then return to the original location.

On Friday (Nov. 13), at 4 p.m., the First, Third and Eighth districts will hold their march. The march will begin at Dillard University, 2601 Gentilly Blvd., proceed down Gentilly Boulevard to St. Anthony Street, then turn left on St. Anthony Street to Mirabeau Avenue. The march will end at Beacon Light Church, 1937 Mirabeau Avenue. Shuttle service will be provided. Participants are asked to part at the church and shuttle to the staging area.